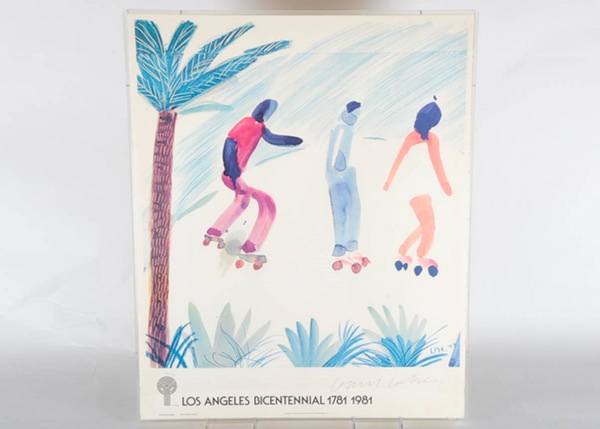 My friend Anne liked to tell everyone that visited her at Cedars that the 7th floor was the best contemporary art museum in the city. Years later, I still agree, but would add it’s not just the 7th floor, it’s the entire hospital.  Marcia Weisman, the art patron donated a chunk of her collection to Cedars, and jumpstarted what is arguably one of the best contemporary art collections in hospitals I’ve ever seen. I have spent way too many occasions at Cedars, and I relish in solace pacing the halls gazing at amazing works by Calder or Oldenburg and temporarily transporting my mind from health and sickness to art and transcendence. Sometimes I yearn to peek inside the rooms to see if the art inside the rooms is just as amazing as the art in the halls.

A few years after Anne passed away, one August I was thrifting through the bins in Santa Monica and came across this image of 3 skaters in Venice, a Hockney watercolor mounted on foam board, created to commemorate the 200th anniversary of LA.  It seemed so familiar, but I couldn’t place it. It wasn’t very expensive, but I was broke and couldn’t afford to buy it, but I gazed at it longer than anything else that day. I remember stopping at the image, my hand brushing the top of it, trying to remember where I had first seen it, unable to remember, yet still very moved to stumble upon it. At the time we used to have Monday night artist dinners, a tidy excuse to bring together “artist friends” and keep out others. At dinner that night, I told both Sean and my friends Carol and Yogi about the image, and a few weeks later, I was extremely surprised to find it was my birthday present.

It’s often the first thing I see in the morning and last thing I see at night.  I often dream about the characters in the painting. My dreams are often the minimal succulent landscape of the piece. It wasn’t until a few years after I owned the piece where one day, revisiting my Flickrstream, I found a photo. I had originally shot it in Anne’s hospital room on the 7th floor of Cedars. I had always remembered her story about the art being so great on the 7th floor, I just had forgotten that this was one of the pieces.

I tell this story a few years later. It’s August again, what always feels like the hottest month on earth. 2016 has been a rough year, personally and culturally. There are multiple sick family members; Prince, David Bowie and my hugely influential college writing professor Carolyn See have died. My Candidian optimism seems worn, and the world, which once seemed like an endless place to explore, now seems much scarier to me than it has since the last time I remember feeling so creative. That was the August before 9/11, when I wholeheartedly and disastrously fell in love with a German DJ who turned me onto Detroit techno and California art. It’s been exactly 15 years, enough time to heal, yet still hurt. 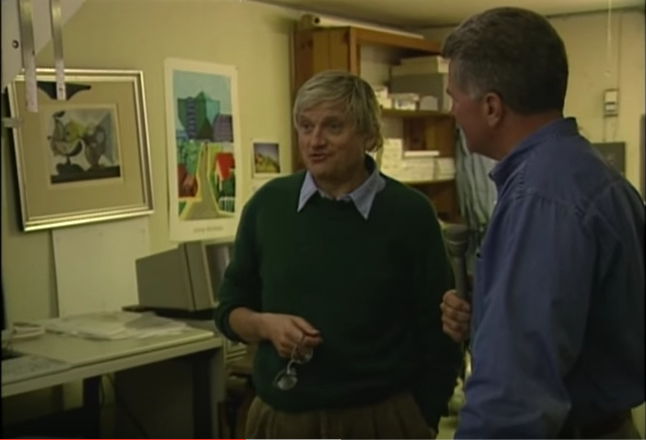 Tonight, LA Louver hosted a screening of Huell Howser’s shorts with David Hockney created during the 80s. It was sold out and I wasn’t able to go, but it got me thinking I should find the videos on YouTube. Sure enough, one of them was there and I began watching it. I was properly entertained, meeting Hockney’s dogs and treadmill, when I noticed in the background, a print of Hancock Street, a portrait of the Pacific Design Center he hung on the wall of his studio.

I stopped the video, stared at the image, then screen shot it. I own the print, I bought a bunch of copies when I first stumbled upon it.  It was meaningful as it’s the reverse shot of an experimental short (if you could call it that) I made many years before I saw the print. At the time, taking video seemed so exotic. Phones didn’t have video capabilities and shooting in public was forbidden. The Pacific Design Center always had an exclusive “you can’t take photos inside” vibe and I remember surreptitiously making this little short, thinking I had punked the guards. When I was a child, all I wanted to do was be a film director, but I never made any films with a start, middle and end until I pressed record on that escalator in the PDC.

In that split second of recognizing the PDC image on Hockney’s studio wall, I was brought back to the notion that objects in the screen are closer in memory than they appear. Sometimes it’s so easy to fixate on the details that the plot becomes unraveled, hazy, nonlinear. But what is background noise, or extras to some, is sound and plot to others. It just depends on what story you’re looking for. I’m always looking for the tangents.

It’s almost 25 years since the first time I saw “Silverlake Life: The View From Here,” the doc of Tom Joslin, my mom’s late writing partner, who was an integral part of my childhood, who ate dinner at our house for many years of our lives and who was the first person that taught me that writing is so much better while listening to music. When he was dying, he decided he was sick of waiting for others to fund his films and he would make one himself. He became distant from my family during the last year of his life and then passed away. It’s a beautiful and moving portrait, and he dies on-screen, which to a 16 year old was absolutely brutal to watch the first time, except by the second time, it made him almost immortal. I just always found it painful then that there is no mention of my mother or anyone in my family in the film, except for a scene where there is a shot of a piece of art my mom gave him hanging on the wall.  This piece of art was the only connection I could make between what I saw on screen and what I remembered about this person that I had loved like a father growing up. I was so disappointed that we were forgotten, but the painting on the wall reminded me that there was proof we existed. 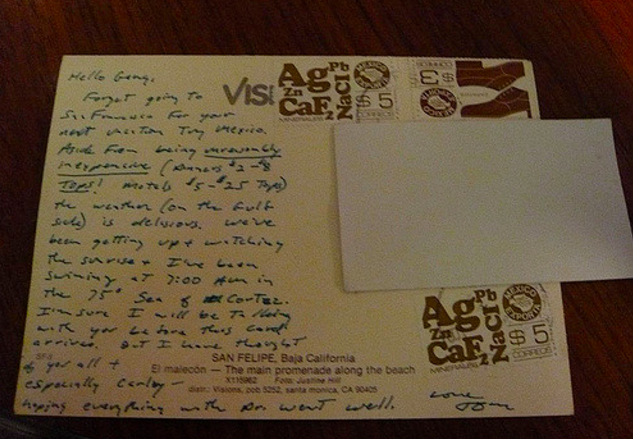 The only proof anyone will have connecting Tom with me beyond these stories is this postcard he sent us when I was 7 and I was probably at Cedars myself to get my tonsils removed, a standard yet exotic procedure for a 2nd grader. It’s the only mention I have from him, a mention at the bottom of a postcard, “especially Carly – hoping everything with Dr. went well.”

I don’t remember the paintings on the wall from my room there, but sometimes I wonder if it was that Hockney I look at every morning and every evening, if in fact I saw it much earlier than I thought. Tonight I imagined that Tom had written the story of the 3 skaters in the painting. They sing, “We’ve been getting up + watching the sunrise + I’ve been swimming at 7:00 am in the 75° Sea of Cortez.” And as 3 skaters repeat the lyrics, they drift beyond the frame into the future.