Looking back at LA’s vast art weekend, there was plenty to see in the realm of great and strange contemporary art. There was also quite a number of, “I don’t get it, but let’s move on.” I would say my curatorial eye doesn’t ponder what I don’t viscerally enjoy. There is so much to process in such a compressed timeframe that it is easy to instantly forget. Below are four works that I found compelling at Sunday’s Art Los Angeles Contemporary Fair in Santa Monica.

The most polished of the four art events I attended over the weekend, ALAC’s intimate and carpeted venue at Santa Monica’s Barker Hanger feels the most European of the events. Modernica rented furniture abounds at the booths and there is a feeling that often the art complements the understated design lifestyle of the collector. Here are a selection of pieces I would have bought for you.

Cakes and donuts have been top of mind for me lately with Daniel Rolnik’s bakery installation downtown delighting me on Friday. But this series of Van Eeden works was intriguing for many reasons, not least of which is his narrative practice of depicting only objects and stories from before he was born. Aesthetically, the pieces that wow me capture a fleeting life moment and this one does just that. 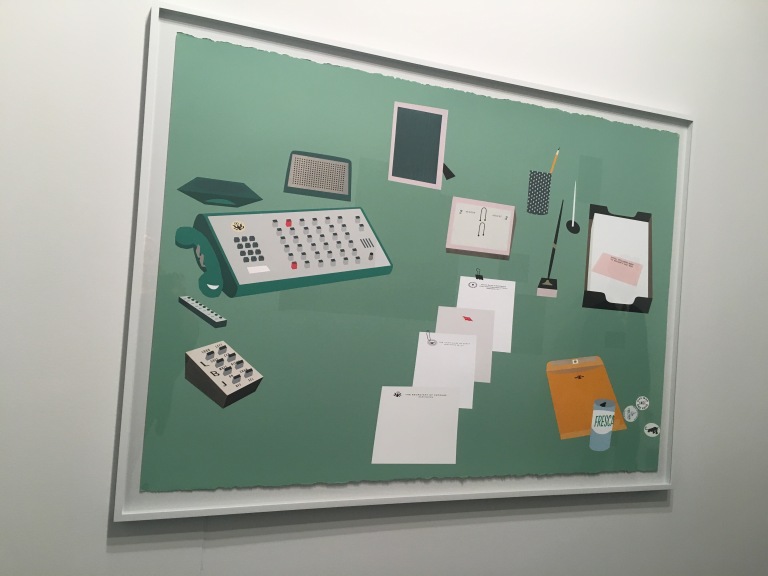 2. Matthew Brannon, “Oval Officer” at David Kordansky. Brannon’s process combining silkscreening and handpainting is visually arresting, but its the content of his work, the often forgotten ephemera of the past that draws me in. There is a playfulness to each of the three pieces in the series shown at ALAC that is reminiscent of a forgotten time in America, where children gazed at their grandfather’s organized desks as Tom Sachs chanted in the background, “Always be knolling.”

I want this one in my office this spring.

The contextual artifacts inside of crowded booths are some of the reasons I return again and again to new art fairs. These are the objetsmarts, the useless to some and priceelss to others, pieces of history. The gallerist Leo Castelli has become one of my art world heroes and the artist Roy Lichtenstein inspired me to start collecting, so the 1-2 punch of them together in a work of art stops me in my tracks.

It’s also a reminder that while the old guard of American contemporary art may now no longer be on earth, we can still celebrate their legacy with quotes. From an Artsy piece I liked on Castelli, “once, Castelli’s friend Willem de Kooning joked that, “you could give that son of a bitch two beer cans and he could sell them;” Jasper Johns took the challenge seriously, give him (Castelli) a sculpture of two Ballentines beer cans and Castelli sold them.”

If I owned the above piece, the above quote would be my title card.

4. Matthew Chambers at Praz Delavallade.  Violence, passion, swathes of color, these are all characteristics of Chambers’ ecstatic works this weekend.  Crafted from acrylic, enamel based adhesive and nylon flocking, this series of works was some of the most exciting I saw over the 3 days. They were also expertly installed in a seductively decorated booth. Winning.